Home Analysis from a Federal Health focused IT Staffing firm: How’s The Market? – More IT jobs in Maryland today than 1 year ago

Analysis from a Federal Health focused IT Staffing firm: How’s The Market? – More IT jobs in Maryland today than 1 year ago

Just last week, on a call with a client, after we had discussed the recent challenges she’d had hiring a good software engineer, she asked me a question I’ve heard so many times before: “How’s the market?” She was surprised it wasn’t easier to find great people quickly, considering all the news about employment losses across the nation. This is the question I get the most from my clients, often when we actually have a moment to breathe and aren’t both running to put out the current fire. Sometimes they want to know if they should be more aggressive in their negotiations, or they just want to get a feel for the trends, or maybe they’re thinking of testing the market for themselves. These days, they are admittedly shocked to hear that there are more IT jobs in Maryland now than 1 year ago. Yes, more IT jobs in Maryland than this time last year! National employment is down by 6.4% from a year ago, even after the recent rebound, so how are there more IT jobs in Maryland than before COVID? Here’s the scoop, straight from last week’s job report data from the U.S. Labor Department.

We all witnessed the economy take a nosedive at the beginning of the COVID-19 pandemic in the U.S. and now see it slowly rebounding. Information Technology jobs are not immune to these difficult times but, buoyed by Federal spending, the Maryland IT market has been quite immune. For most of the last 13 years I’ve recruited for Maryland companies primarily, recruiting and staffing for Federal Government contractors serving agencies with health missions primarily, and for nearly that long I’ve made some version of the below graph. This version compares IT jobs and Government jobs in Maryland to employment totals nationally, indexing all the employment numbers to January 2017. In part, this tells us that my 2 statistics classes in college paid off apparently, so if you nerd out on graphs and data like me, here we go! 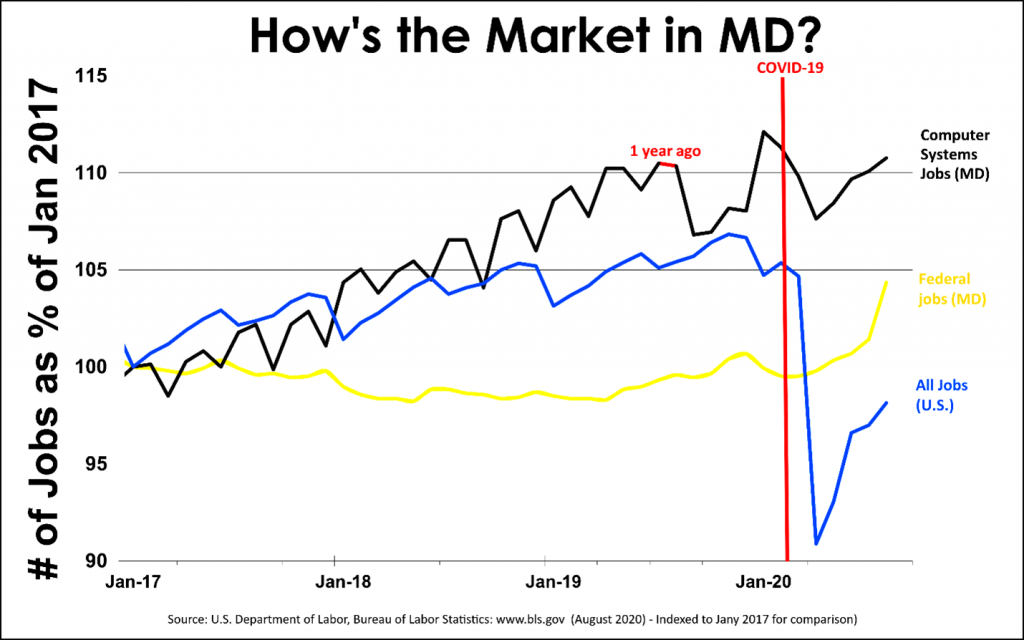 The United States Bureau of Labor puts out a monthly jobs report we often hear about from the media, who typically focus on the national stats, including the unemployment rate. The Bureau of Labor Statistics (BLS) database though slices up the data for our use in lots of ways, including providing data on the Computer Systems Design and Related Services category (“IT jobs” for our purposes). This consists of occupations such as: Data Scientists, Software and Web Developers, Computer Programmers, Software Quality Assurance Analysts and Testers.  In August 2019, during a very bullish economy, there were 81,000 IT jobs in the state of Maryland and in August 2020 that number was up to 81,300, just 5 months after we saw the biggest job losses in U.S. history and a bearish economy due to the pandemic. This is staggering since the pandemic briefly brought the national economy to near Great Depression unemployment.  For IT jobs across the entire U.S., the trend is not quite as rosy, but the decrease is still less than 2% of total IT employment, compared with the 6.4% drop across all jobs.

Why is Maryland Different?

What could be causing this steadiness in IT jobs in Maryland during one of the most difficult economic periods in a lifetime?  The primary driver is undoubtedly Federal spending. The Federal Government typically employs more than 2 million people at any one time and it has held to around that figure for the last four decades. Maryland is home to branches of some of the largest Government agencies in the United States including: NIH, FDA, CMS, SSA, VA, and of course, the Department of Defense. In 2019, Maryland had the third highest Federal employee headcount in the nation, though it ranks first in Federal jobs per capita.

In addition to direct Federal employment, there is of course, all you good folks, the Federal contractors. Computer Systems Design Services is the #1 industry (NAICS code) for Federal spending in Maryland, and Maryland and Virginia are outliers for the amount Federal contribution per capita. Maryland is also 5th in the nation for total percentage of employment as a direct result of Federal spending.

Real private-sector jobs are not to be ignored as a factor for driving demand for technical talent, however.  Technology companies across Maryland continue to receive huge influxes of cash from venture capital firms and the state is on pace for it’s 2nd best VC investment year ever. This most recent quarter, Maryland actually took in 70% of the DMV’s venture capital!

What does it Mean for Technology Companies and Federal Contractors who Want to be Competitive?

The amount of money being divvied out to contracting fosters fierce competition, both to get the price right and then to staff it at that price. And it can be challenging to price a proposal when you are unsure about staffing the win. Performance on the program after a win are “good problems to have” we used to say, but they’re problems nonetheless if poor performance at program stand-up affects future opportunity. Unfortunately, when it’s time to staff up, software engineers and the like aren’t sitting at home waiting for a job offer. They’re already working, and they know they are in high demand because recruiters hit them up daily on LinkedIn, GitHub, StackOverflow, and every other place they spend any time at all. (Are we recruiting on Fortnight yet?)

The pandemic changed the equation, forcing remote work upon many teams that hadn’t adopted it yet, but the highest performing teams were already doing it. Even our company, which had recruited in the DMV almost exclusively for our first 7 years, now has the ability to employ temporary and temp-to-hire employees in 13 states and we’re adding them all the time, but that all happened in the last couple years as our top clients required it to be successful.

Pricing continues to be an enigma for many companies as costs shift away from physical office space and traditional benefits toward secure technology that empowers mobile and remote staff, and other benefits to attract and retain remote talent. It’s important to consider how to attract remote talent more effectively than the competition. The traditional perks may not apply, and it’s still unclear what employees will demand more of once they settle into the new normal, especially as they become more aware of the negative effect that isolation has on their overall happiness. The trend toward fully remote work has certainly loosened the labor market for now, but increasingly isolated employees will significantly increase turnover when they feel comfortable being present in person. Many of our clients are finding locales where they can build hubs, so that post-pandemic, they will be able to bring staff together. There are certainly some areas of the country more conducive to identifying, attracting and retaining the necessary talent. This too requires a time/cost trade-off decision.

While COVID-19 has certainly shaken the economy and national employment, it’s clear that IT in Maryland remains shockingly just as strong as it was prior to the pandemic. How’s the market?  Still pretty darn good it seems. Dang… and I was hoping we could find a few cheaper staff on this one…

Mark Tyrrell is the Managing Partner and a founder of Right Resources and has recruited professionals in the Baltimore area for almost 15 years. He graduated from Villanova University studying business and finance and started his career as a somewhat technical consultant with PwC Consulting. He has staffed positions for some of the most respected companies in and around Baltimore. He lives in Catonsville with his wife and two beautiful children and wants to be humbly grateful for all the opportunities he’s been provided, including this company.

Over the last 9+ years, we have filled hundreds of temporary and full-time positions at the Centers for Medicare & Medicaid Services, the Food and Drug Administration, and other agencies within the U.S. Department of Health and Human Services. We have supported every step of a program’s staffing needs: from identifying key personnel at bid, to re-badging and program stand-up, to finding temporary staff for budget underruns as programs approach re-compete. We save clients time because we understand the specific challenges of staffing and recruiting for Federal contractors and we’ve got the network of folks with experience there.

This topic contains 2 replies, has 3 voices, and was last updated by

You must be logged in to reply to this topic.

As a special thank you to all the federal agencies that have been supportive of our efforts over the years we offer a free individual membership to Federal Government employees.  Membership includes:

The G2Xchange Health Daily Take Newsletter which includes the latest intelligence, news, and happenings from across the Federal Health IT Market.

THANK YOU
FOR YOUR
SUPPORT

The Vault is a listing of expiring contracts, task orders, etc. within a certain set of parameters, to include:

Feedback/Suggestions? Contact us at Vault@G2Xchange.com and let us know what you think.